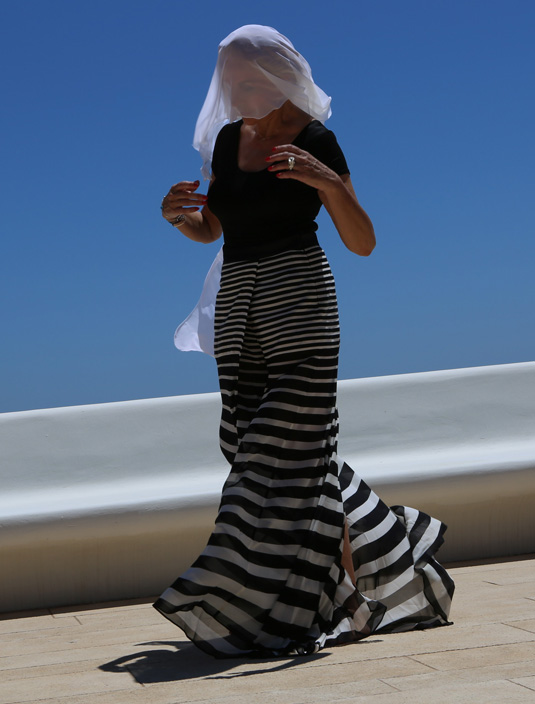 Della Rounick was born in Neapoli, Kozani and grew up in Veria where she graduated from a local girl’s high school. She studied French philology and philosophy at the University of Toulouse in France (Faculte des lettres et sciences humaines). She worked as a model in Johannesburg, South Africa, booking with Stella Grove in South Africa, Wilhelmina in New York and Christi models in Athens.

She designed a very successful line of evening dresses in New York, Niteline by Della Roufogali, a subsidiary of The HeRo Group. She became chairman and a CEO of The HeRo Group which was listed on the New York Stock Exchange.

The HeRo Group’s clothes were manufactured in China and she made trips to Hong Kong and Shanghai twice a year – for over 12 years – to oversee the label’s productions.

Della studied painting from 1989 to 1992 at the Art Students League in New York with Bruce Dorfman and Richard Poussette Dart. She attended the winter classes of Isabelle O’Neil Foundation Faux Finishes in Palm Beach in 1993 and 1994.

Besides her artistic endeavors, she was a member of the Steering Committee for The Alzheimer’s Association Rita Hayworth Gala for 17concecutive years, as well as for The American College in Greece for another six years in New York. She was a benefactor of the Christopher Reeve Paralysis Foundation, the Gabrielle Angel Foundation for Cancer Research and a Chairman for a fundraising event in New York for the Gennadios Library in Athens. Together with her late husband, Herbert Rounick, they were for several years patrons of the MET.

In 1997, she had her first exhibition of paintings at the New World Art Center in Soho, New York. All the proceeds went to benefit AMFAR Aids research.

In 2005, Della returned to Greece where she worked in arts and crafts at her Mykonos studio. It was then that she started developing her paintings into sculptures. She began taking sculpting classes at her old schools and in the summer of 2016, Della presented a series of bronze sculptures in Mykonos called Andromeda and Pleaides. That same summer, her work was part of a group show at the Skoufa Gallery in Mykonos and later in the fall, at the same Gallery in Athens.

In April 2017, she opened her own gallery Della Rounick Sculptures at Leventi 1 in Kolonaki, Athens. The following month she participated in Art Athina in Athens and that summer her sculptures were displayed in public spaces in Mykonos including Principote Beach, Scorpios Beach, Cava Tagoo Hotel.

In October 2018, she presented in her own gallery the new series of bronze sculpture “the unbearable emptiness of absence”.

In February 2019, she participated at the Exhibition “A jewel made in Greece” in Zappeio Megaro in Athens.

In July 2019, she presented the series of sculptures “Personal Mythology” at the Big White Gallery in Mykonos.

Her sculptures are owned in private collections around the world, including New York, South Hampton, Los Angeles, Tel Aviv, Paris, Gstaad, Athens and Mykonos. Having lived in the Museum Towers condominium in New York for 20 years, from 1985 to 2004, with MOMA as her neighbor, has been a continuous cultural experience and inspiration for Della.

The last two years of pandemic COVID-19, she worked non-stop following the series “Personal Mythology” with a new pop proposal related to her path in the field of fashion.

Her future plans are a selective presentation of all her work, which, although varied, is consistent in its development.